History of the Garage

The garage is so common in our lives that we don’t often stop to wonder how and why the garage even came into existence. And since garages and garage doors are what we do, we figured we would take a moment to reflect on the history of the garage and do the wondering for you.

The term “garage” comes from the French word, “garer,” meaning to shelter. The first garages were known as carriage houses. Before cars, people would keep their first mode of transportation here, the horses, and when humans began to the use wheels for transportation, the carriages. The wheel dates back to 3500 BC or even earlier, invented in Mesopotamia, so it said that the first “garages” or storage for their wheeled transportation dates back that far as well. Fast forward to the 18th and 19th centuries, carriage houses were more common and were used as storage, kept on the property but not attached to the house. These were basically just barns, with dirt floors and stalls.

But as cars began to grow in popularity in the early 1900’s, especially after the passing of the Federal Road Act in 1916 and the Federal Highway Act in 1921, owners needed a place to keep their shiny new machines. At first, the horses and cars shared the carriage houses or cars were kept in publicly owned garages. But with more and more cars needing storage and owners not wanting to endure the smell of manure and oils in their carriage houses, the garage was invented, which was just a carriage house for cars with the same double barn door to get in and out.

The first overhead door was developed in 1921 by C.G. Johnson so that car owners no longer had to deal with opening and closing the large double doors to access their vehicles, which wore out over time and were hard to open if snow blocked the doors. And to help the public with opening his overhead door, Johnson invented the automatic garage door opener in 1926.

The Overhead Door Corporation was invented, followed by others, some of which are still around today, including Wayne Door. Garages grew in popularity and by 1941, garages that were attached to the home began to appear and the percentage of square footage given to car storage continued to increase. Today, the garage is no longer a luxury but a necessity that can be found in almost all homes today. And not only that, how your garage door looks can seriously add value to your home!

We hope you have enjoyed this history lesson and can now appreciate the historical background of your modern day garage. Think of us at Precision Door Service next time you need help with your garage and let our expert technicians give your garage the service it deserves.

Click Here To Learn How Precision Is Keeping Our Customers & Employees Safe. 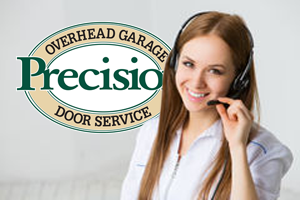 Don't Wait on Hold!
Let Us Call You!